So going back before the 1700’s the main item a baby would be wearing would of been a swaddle wrapped up for warmth and safety.

A lot of clothes for babies were very similar almost always very long and almost like a christening dress there doesn’t seem to of been a problem when dressing baby centuries back there was no identity discrimination so it was a very straight forward plan for the baby.

The length of the dress would have been folded at the end to keep the baby warm and protect their little legs in the cold weather.

When the baby got a little older the clothes would become shorter and this was good giving the baby more movement and freedom to move, also the clothes became shorter as they got older.

As the clothes got shorter this really became a standard for a growing toddler.

Babies were dressed in the same long dresses they were also dressed by society the fancier the dress the higher in society they were positioned in society.

The higher in society the families were the better material such as silk the fabric and pattern would be bright and cheerful.

The most common material would have been cotton the outfits and other materials they also would have a small caps to go with the dresses, both baby boys and girls would wear the dresses they were seen as a unisex outfit for babies.

It is after the baby turns maybe two years old that the toddler would be dressed in the according way for the sex of the toddler either boy or girl.

Such a different way of dressing a baby and both so beautiful.

The clothes changed over the years especially into the nineties and the bodysuits were introduced.

But before the all in one the clothes were changing quite a lot and it was very visible the dresses for girls changed and then the boys started to wear shorts and trousers there was no dresses after so dress code really changed.

So i guess the changes get even greater when you view the outer lines of history but really we can’t go back so far and see what is happening or what the babies were dressed in so in all fairness where we can go back as the baby being in a swaddle.

So the fifties were a big change in baby and toddler style it was the year of the rock and roll so dresses were full skirt without the petticoats and baby boys were in dungarees or shorts and a shirt.

This was a fantastic era where clothes meant feminine and the dress code was amazing for adults but for baby girls they had some absolutely beautiful dresses.

The era of rock and roll was a huge part of most peoples lives the babies clothes were not the only change there was, of course, the baby transport they made huge changes the pushchairs and the prams but most of them were quite elegant as well.

Little boys had such cute shorts and shirts sometimes they had a small tie or even smaller baby boys had a romper suit there were also romper suits for girls as well they had and still have an all in one romper suit for boys and girls.

Dungarees were also such a big of a baby and toddlers small life they were very popular these dungarees also were great when the baby was learning to crawl as they protected the knees.

Dungarees were looked at as being for farmers years back but i think that babies and toddlers look so cute in them they can also be worn in winter and summer so they can also have whichever top the parents wish to put them in for winter or the summer keeping baby or toddler warm and cosy.

Baby gro’s were invented and called the onesie this was invented by a Walter Artzt in the 1950s, the babygro took the market by storm and they became a huge production line for the baby to toddler.

One of the first onesies were fashioned around the adult jumpsuit at the times they were in fashion, The design was simple.

The fashion has changed greatly since especially in a baby fashion

Fashion changed around the 19th century the colors that were used mostly were pink and blue and small babies were almost always dressed in white dresses.

Back in the beginning of the century pink was often used for a boy but can you imagine the boys in a cute pink onesie and blue was used for the girls.

The cute newborn onesie in pink was often given to a newborn boy as a gift for the baby boy.

By the time 1950s the color trend had changed and boys were wearing blue and the girls were switched to pink.

The latest trends became quite popular among the onesies the designers were adding the technology of a baby Mimo monitor to the onesies they were being shipped worldwide by this time,  these monitors actually attach or connect to the internet and it makes life easier when the parents can see and hear the baby and not have to worry about them.

The monitor is also able to detect the baby body temperature, body positions, and movements, these can all be sent to the parents mobile phone using an app.

This particular babygro would be a great baby shower present. 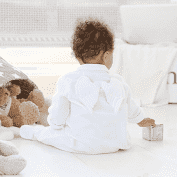 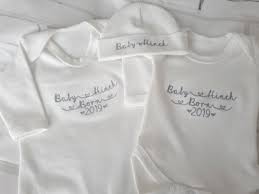 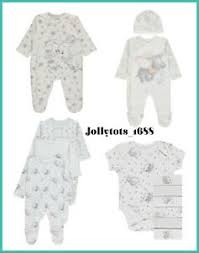 These baby gro’s are more recent designs, of course, there were also very different designs of baby gro’s that also folded over the front some fastened at the back as well as the one that fastened from the front.

So we have come a very long way since we used to wrap our babies in a swaddle to using disposables nappies and terry nappies with rubber pants.